As a part of the ongoing Oracle Analytics Summit I presented on “Upgrading from OBIEE to OAS” together with Gianni Ceresa on Thursday, 13th of August.

With OAS being available since the beginning of this year already, the topic is becoming more and more pertinent to clients who are still on the legacy Oracle Business Intelligence versions.

Rather than a common sales pitch, this session focused on a far more praxis-oriented approach with real examples and lessons learned from actual upgrades.

“In this session you will hear from both Gianni & Christian, two independent Oracle ACE Directors in the Analytics space. They will discuss why existing Oracle Business Intelligence Enterprise Edition (OBIEE & OBIF) customers should upgrade to Oracle Analytics Server (OAS) if they need to stay on-premise. They will briefly consider the factors that should weighed up when deciding between staying on-premise (with OAS) or moving to the cloud with (Oracle Analytics Cloud). They will go through and show much of the additional functionality that becomes available upon the upgrade to OAS; Self Service, data preparation & augmented (machine Learning) and discuss the value it brings to an organization at no additional license cost. Gianni & Christian will also cover the approaches available to customers wanting to undertake the upgrade and the things that they need consider.”

You can also see this presentation directly on the event home page together with tons of other Oracle Analytics content.

I’ve had quite some feedback and reactions on this post over various channels on the last days. I’ll leave the original post as it is so you can read through it, but here are the most important takeaways of the back and forth behind the scenes:

a) Reminder: Deprecated doesn’t mean dead. Otherwise I would have said “dead”
b) Oracle reassured me that they won’t just kill a feature without thinking about proposing a replacement
c) They’re probably going to spell all of this out more explicitly in the documentation
d) Thinking about the support lifecycle of Oracle products each new release means commencing a 12 months grace period for the “now old” version. For something like OAS with yearly releases we can therefore expect a roughly 24months-long timeframe in which we get warned about a feature change in V1 (month 0), then V2 comes along and the feature goes away (month 12) and by month 24 we have to move away from V1 and lose the feature/replace them with something else/do it differently/…. Note that this is a hypothetical case. I’m not saying these features ARE going away by V2 of OAS.

And that’s it for the update. Huge thanks for the amazing reactivity of the Oracle Product Management team and Partner Management as well as everybody out there who bombarded me with messages over just about every conceivable channel.

Every week between OTN, stackoverflow, and direct questions sent to my email accounts there are 2-4 occurrences of “How do I install OBI on Windows 7/8/10” or “I am having issues with installing OBI on Windows”.

In order to clear up this topic once and for all – here is the ultimate guide to running Oracle BI on your Windows desktop OS:

Now it you haven’t stopped reading yet because you thought “Hey wait this isn’t a Windows installation” let me explain a couple of things:

Point #1: Oracle BI is a server tool. It isn’t your WhatsApp desktop, it isn’t your Chrome/Firefox/Safari. It’s actually a whole range of servers and as such not something you run on a desktop operating system. And because of that:

Point #2: It is NOT supported on Windows desktop operating systems!
If you go to the Fusion Middleware Supported System Configurations page and open the certification matrix for the current 12.2.1.2.0 version you will find that the only mention of anything “Windows” are 2012 and 2012R2:

Point #3: That means that Oracle will never bother to test things fully or help you out if you mess up things or can’t get something to run because you installed on a Windows desktop OS. You’re on your own.

Point #4: Even if you make it run or clamour “But I’ve seen tons of videos where” it works like someone recently did – I don’t care and neither will Oracle in terms of their product development or support. Sooner or later you will run into follow-up issues and scratch you head and go mad because things just don’t work or not as expected / in a weird fashion.

People this is how technology works. An Android app is an Android app and not usable on iPhone unless the company making it actually releases an iPhone app. Ask any iPhone user and gamer how they felt between the Android release of Pokemon GO and the iPhone release last year.

To use another example: You shouldn’t fill up a diesel-engined car with petrol just because you always took petrol from the pump or whatever unvalid reason you can conjure up. Well you can but don’t complain afterwards that your engine is busted

Got it now? Thanks!

Updated and uploaded the presentation decks for my recent UKOUG sessions for anyone who missed them at the event and doesn’t have access to them over their website:

Some 2 weeks back Tim Hall had the wonderful idea of getting together on a specific date and making our love for the Oracle Technology Network known to the world.

Continuing on Robin’s list of what OTN does for us I would like to add their conference tours across the different continents like the current one running in the EMEA nordics. Secondly – and obviously – the ACE program which is quite simply the most amazing community I was ever a part of.

Anyone who know me knows that I quite literally worship the power and flexibility of the core BI server which harks back to the end of the 1990 when a couple of extremely clever guys created a metadata engine which was so far ahead of its time that its core remains pretty much the same until today and serves as the basis for Oracle Business Intelligence (OBIEE, OBIA, OTBI, etc), Visual Analyzer, BI Cloud Services, Data Visualization and Data Visualization Desktop.

One of the key functionalities of the BI Server is its ability to read just about any source of data you can imagine or come up with:

Add to this list of natively supported source types the power of reading literally anything based on ODBC and it becomes almost problem to find something you can’t analyze with OBI and its children.

Databases, multidimensional cubes, flat files, Hyperion applications, XML are at your fingertips just like many of the new kids on the block. Hive, Impala and Spark that is…not these guys.

So we know that 12c made some small changes in the security area – the most well known being “BI Administrator” being renamed to “BI Service Administrator”.

This can cause some issues when importing 11g BAR files with old “BI Administrator” roles but set “security model=false” during import. Well this isn’t what this post is about but still something you may want to remember 😉

What this post IS about is the little weirdness which is happening in Application Policies and the Permissions you can grant to a policy and its principals.

Can you spell “redundant”?

Ok let’s turn this upside down and create a new application grant for a “close to Admin”-type set of rights: 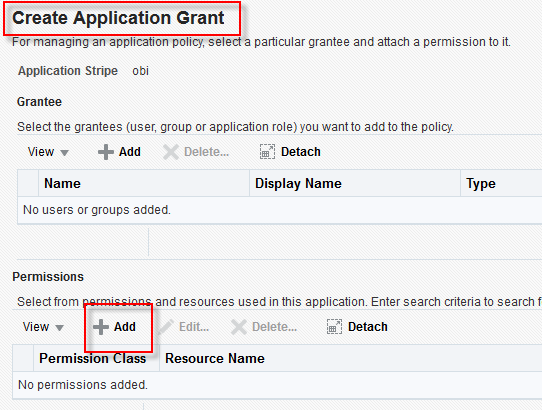 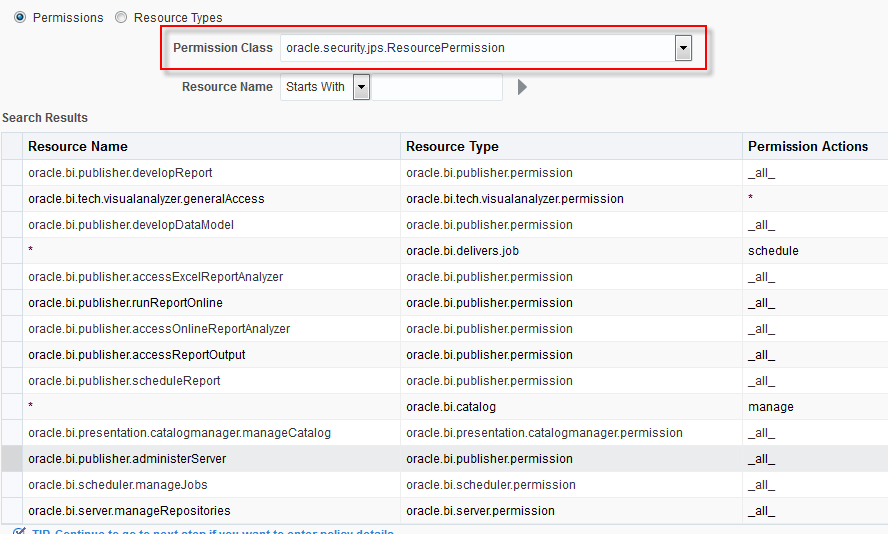 Funny enough we don’t find all four of the permissions in the screenshot above. Two catalog permissions are present – “oracle.bi.presentation.catalogmanager.manage” and “*” for the oracle.bi.catalog permission type. “*” for oracle.bi-repository isn’t there though. Hmmm. Let’s search by “Resource Type” and try to find the four in question one by one. 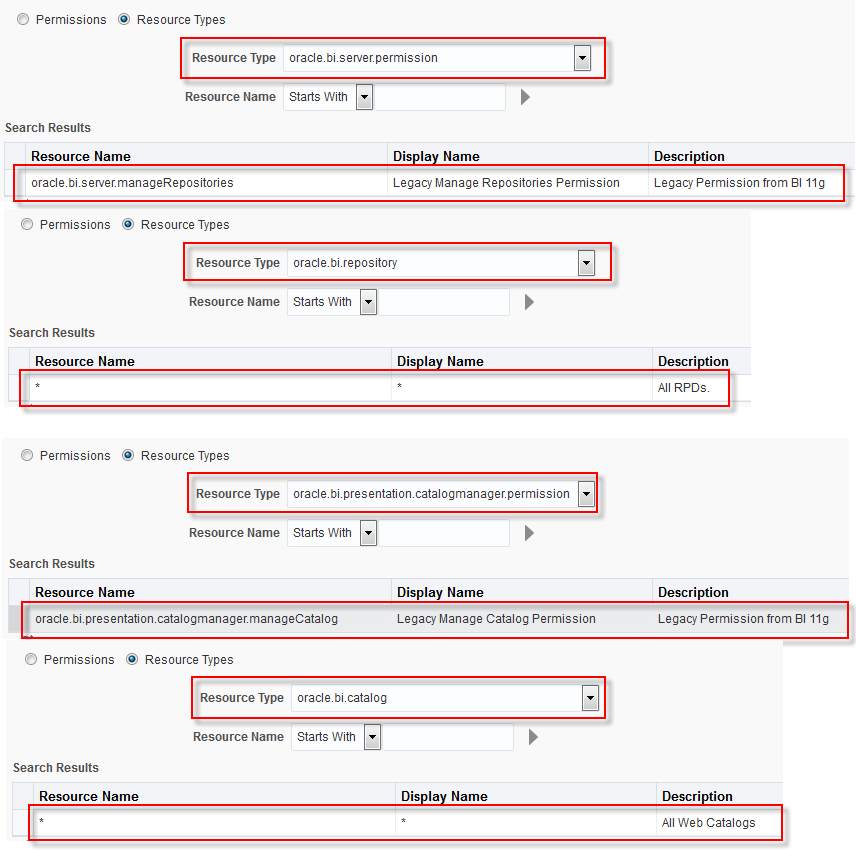 Why hello there. Not only do we find all four but also a nice little remark on the two known ones: Legacy Permission from BI 11g

So it seems that those two are about to get dropped and be replaced by the new “*” resources. But why is only one of the two new permissions visible when searching by “Resource Class” when it seems to actually HAVE the correct resource class assigned to it?

Smells like something needing a little fix. Most important though: going through permissions by resource type and checking the ones labeled as “Legacy 11g” is a good idea in order to not be relying on things on their way out of the product…

A new functionality has been introduced in the latest release of OBI – 12.2.1.1.0 – which has gone a bit unnoticed since it hasn’t been included in the documentation anywhere. This is surprising since it’s been requested since a long time.

As of this release the usual 3-level dashboard hierarchy has been transformed into a 4-level one:

Configuration is very straight-forward. Just click the usual “Add” button which will give you two options as of now:

Working on a system without full access can often be a pain and prevent you from being able to get information necessary for your work. One of those areas is access to system variables. Good thing is. that bits and pieces are flying around all over the web and can be found for example both Oracle’s own SampleApp or this little gist here from @rmoff.

I’ve started mixing and matching together as much as possible of “things you can potentially get out of the system” without having anything else than Answers access and combined it into a single analysis. You can find the gist here. To put it into your system all you need to do is create a new analysis, copy over the XML and reference any of your Subject Areas (two locations; top and bottom of the file). Doesn’t matter which one as long as it parses correctly. Not a single query against actual data sources is run.

I’ll keep adding to this and expand it with whatever hack I can find to circumvent the pesky “you’re not an Admin” situations.